I would like to start this post by saying how much I appreciate everybody who takes time to read my posts and encourage me to keep going.  This is the first time that I’ve ever really used my gift of writing to glorify God, and I L-O-V-E it! I have decided to go back and finally tell the world about an experience that I had that lead me to spread God’s word in the way that I do.  This experience was so precious to me that I wanted to keep it as private as I could for as long as I could.  God has put it upon my heart to share it, however, so here it goes! 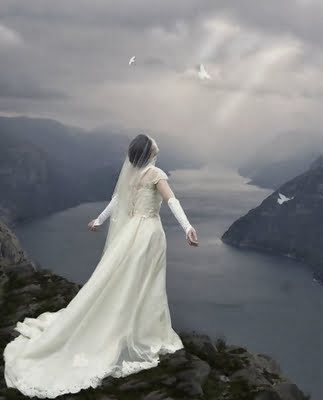 One night as I was dreaming, I was at a celebration where people were dancing, singing, and just having the time of their lives.  There were an equal number of men and women present, and every woman had a man to dance with.  The only exception was two women who were in the corner chatting as women usually do at parties.  I couldn’t hear what those women were saying, but somehow I knew that they were gossiping.  It seemed like a typical dream until something strange happened – something came over me, and I began to spin in circles.  When I stopped, I noticed that all of the women had somehow traded their former party clothes for beautiful wedding gowns.  It was quite a beautiful sight to see so many women in beautiful white gowns just twirling and dancing away!  Suddenly, my eyes began to zoom in on certain women’s dresses, and I noticed that they all had minor flaws.  Some were slightly unzipped while others had hanging straps or slightly revealed undergarments.  I then turned and noticed that the two women who had been chatting in the corner were still chatting it up, but they were the only two women with no wedding dress at all.  They wore all black cocktail dresses.  I remember sitting on a nearby fireplace confused, and that’s when I saw him: Jesus.


Every time I tell this story, the first and most obvious question that follows is What did he look like?  My answer is always the same – he was tall and thin, and had THE bluest eyes I have ever seen.  This was a shade of blue that I have never seen in any eyes on earth.  He also wore a golden robe with purple designs of some sort.  Despite what he looked like, somehow I knew he was Jesus the moment that I saw him.  He came toward me, grabbed my hand, and sat down beside me.  Holding his hand was the most realistic thing that I have ever done in a dream.  I could still feel his hand in mine when I woke up.  At that moment, I suddenly recalled several visions of Jesus that I had read about where people reported seeing the nail scars on his hands.  Of course my curiosity prompted me to turn his hand over, and there was the scar.  What surprised me is that the scar looked like it was almost healed (I had expected a gaping hole).  He looked into my eyes, and said one thing only, “You have to tell them.”  With that, the dream was over.


When I woke up, the Holy Spirit immediately began giving me interpretation of the dream.  I grabbed my computer to do some research, and the Holy Spirit led me to the Marriage Supper of the Lamb that is mentioned in Revelations.  The crazy thing is that I knew nothing about the marriage supper until shortly before my dream.  I know that the lord had been preparing me for the dream because in the weeks before, it seemed that preachers and prophets were talking about the marriage supper everywhere I turned.  The marriage supper is said to be the celebration of Christ reuniting with his bride, the church, after the rapture.  Over time, I have come to understand that God was telling me that the bride (church) was not ready.  There are many people who appear to be ready just like the brides I saw in the dream, but upon close inspection they are, in fact, not ready to be reunited with Jesus.  Furthermore, the two women who had no dress at all represented those who use their tongue to constantly defame and disgrace others.  God absolutely despises it when we speak negatively toward and about our brothers and sisters.  When he told us to love our neighbor as we love ourselves, he really meant that!  (Mark 12:31)


Finally, the Holy Spirit revealed to me that seeing that Jesus’s hands were almost healed was an indication of the fact that he is almost ready for our reunion, and our time is running out!  We don’t have much time to get ready to be united with Jesus, so we all need to commit our lives to him the way that we know we should TODAY.  I know that there have been a lot of conflicting views about when the rapture will happen.  Let me tell you that I have no clue about that even after having this dream.  What I do know is that we only get one life on earth, and whether the rapture comes tomorrow or a hundred years from now, time is running out for each one of us individually.


So, that’s what woke me up and propelled me to stop making excuses about why I didn’t have the time, resources, influence, or anything else to help bring people to Christ.  Heaven and hell have become so real to me, I want to see every single person that I know meet Jesus one day and celebrate at the marriage supper!  I owe the world an apology for sitting on the life-saving knowledge of God for so long, but I’m hoping to make up for lost time.  Time is running out, so make a commitment NOW to do God’s will no matter what!  Nothing outside of his will is worth losing an eternity in heaven!


Let us rejoice and be glad
and give him glory!
For the wedding of the Lamb has come,
and his bride has made herself ready.
8 Fine linen, bright and clean,
was given her to wear.”
9 Then the angel said to me, “Write this: Blessed are those who are invited to the wedding supper of the Lamb!” And he added, “These are the true words of God.”


Have an issue/idea that you would like to see in a future post?  Email me at whitney.p.gordon@gmail.com.  It’s confidential!
Posted by Whitney Patrice at 9:25 AM

Thank you for taking time to comment on my blog! Any profanity or vulgarity will be deleted. All opinions are welcome as long as they are presented tastefully. God bless!