When Guilt Blocks Your Blessing 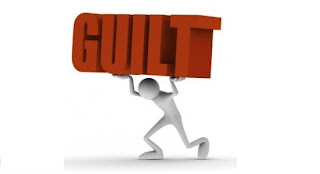 I want to take a moment to thank everyone who took time to read and make comments on my first blog post!  I am so grateful to have such supportive people surrounding me!

Well, my first blog post was a message of conviction from the Holy Spirit.  This time, I want to focus on that nagging, ugly thing that usually comes after conviction: guilt.  With that, I have a story. (You are going to find that I have a story for everything!  The lit teacher in me, maybe?)

I have always known what God’s word says about tithing, but I have not always been a tither.  I gave money to my church here and there, but it wasn’t 10%, and wasn’t consistent.  It’s crazy because I can’t even tell you why I never tithed other than labeling it as pure disobedience (ouch!).  Within the past year as I have grown in my faith, I decided to finally submit and give my 10% no matter what.  I was truly blessed when I started tithing.  Even in those months when I felt like I wouldn’t make it, God made a way for my family to get by.  Everything was great until……

I can’t even tell you a legitimate reason why I did not tithe during that one fateful month.  I was worried that my tithe wouldn’t leave me with enough, but wasn’t I always worried about that?  For some reason, I allowed Satan to influence me to use my tithe for myself.  BIG MISTAKE.  I asked God for forgiveness more times than I can count.  By the time I realized my mistake, I had nickel-and-dimed my tithe money away. (Probably on McDonalds.  It’s just so conveniently close and cheap!)  I wallowed in guilt the entire month, and had completely convinced myself that I had brought a “curse” upon my finances by not tithing that month.  No matter how much I apologized and promised God I would make it up, we barely, and I mean we BARELY made it through that month.

Finally, I literally ran to pay my tithe as soon as my next check came.  Things started looking up, and I was so grateful to be free from the suffering I had brought upon myself by not tithing.  During a quiet time, the Holy Spirit spoke to me.  He told me that God had forgiven me for not tithing the minute that I asked for his forgiveness.  God literally forgave me and forgot my offense, but I chose not to accept his mercy by wallowing in guilt!  *facepalm*

Okay, that story may have been too long, but my point is this: GUILT IS OF THE DEVIL!!!  When we do wrong, which is bound to happen because even the righteous fall seven times (Proverbs 24:16), God forgets about it the minute that we ask for forgiveness!  We allow the devil to convince us that we don’t deserve to be happy and move on from our sins, so we live in guilt.   God forgot about it!  He has your blessing in a nice, big package just waiting for you to receive it.  Step on the devil and walk in your blessing!

I would like to close by saying it doesn’t matter how big your sin is.  I have definitely done some things that are a lot worse than watching Scandal, but God forgave me.  He forgave me of every. single. one.  Whatever you have done, repent!  After you have repented, never, never, never feel shame or guilt for it again!  That, my friends, is true freedom!

Food for thought:
1 John 1:9 - If we confess our sins, he is faithful and just to forgive us our sins and to cleanse us from all unrighteousness.
Psalm 103:12 - He has removed our sins as far from us as the east is from the west.
Romans 8:1 - So now there is no condemnation for those who belong to Christ Jesus.

Have an issue/idea that you would like to see featured in a future blog?  Email me at whitney.p.gordon@gmail.com!  It’s confidential!
Posted by Whitney Patrice at 6:41 PM

Thank you for taking time to comment on my blog! Any profanity or vulgarity will be deleted. All opinions are welcome as long as they are presented tastefully. God bless!